We’re excited to introduce Janelle Hanchett, whose writing brilliantly balances both the hilarious and the poignant in her funny and honest parenting blog, renegademothering.com. We are so thrilled to have her a contributor of mommikin.wpengine.com.

So for those of you “creative” moms who have a hobby or talent you’re just not using because there’s no time, I’ve created a list of Twelve Easy Steps to Doing Creative Work while Parenting. (I’ve written it about writing but I imagine it applies to most art.)

1. Yeah, you know that nap time that lasts 1.5 hours (maximum), during which time you’re expected to accomplish Every Fucking Thing Since the Beginning of Man? Yeah, you just get to write now during that time. That’s all. Just write.

2. Forget the laundry. The hallway. The toys in the living room and the piles on the couch. Forget it all. Step over it. Step on it. Sit on it, near it, in it to get to your computer to write. Neglect everything and do the thing.

3. Put the toddler in front of TV. Feel guilty. Feel super fucking guilty but do it anyway because only the tenacity of A RABID IRRATIONAL BULLDOG WILL GET YOU THROUGH THIS.

4. Learn to write absolute drivel. Silence the voices telling you it’s absolute drivel by writing anyway. Always write anyway. Do not read what you’ve written already because you’ll realize not only should you stop writing because you suck and shouldn’t bother, you might want to just off yourself too, because you’re that bad. LEARN TO LOVE THE DRIVEL. Do not off yourself.

5. Cry on days when the toddler is in preschool for 2.5 hours and the baby decides not to take his only reliable morning nap that day because you realize you’ll probably have to do your writing at 10pm after everybody’s asleep, turning you into a miserable zombie yet another day.

6. On that happy note, learn to write even though your eyes keep getting blurry. Learn to write when you’re so tired your cheekbones hurt (yeah, it’s a thing apparently. Who knew?).

10. Drink so much coffee you wonder how your blood hasn’t bubbled out of your veins. Crash around 2pm but go pick up your kids anyway because you can’t just leave them there.

11. Get okay with not brushing your toddlers hair and letting her wear pajamas all day, in and out of the house. While eating mac & cheese. And yogurt, for the 2nd meal in a row. (I said lower your motherfucking standards and I MEAN IT.)

Write the shit, because it’s better than writing nothing, and if nothing else, you’ll learn that you can do it. You just have to make it insansely important and get crazy and not complain about it because you’re the one who chose to have the kids, dumbass. Now deal with it.

We may not have a room of our own, but we’ve got a tiny spot on the motherfucking couch, and it’s calling our name.

Read the full article on renegademothering.com. 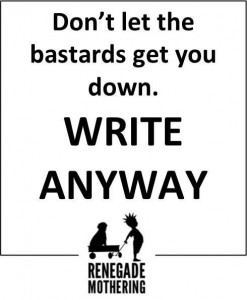 Janelle lives in northern California with her four children and husband, Mac, who thinks “getting dressed up” means shaving his forearm tattoo. Join her in the fight against helpful parenting advice at her blog, Renegade Mothering.

Sarah Golden, Surface Designer and Painter, On Managing Her Time to Keep InspiredJuly 31, 2019
Be your own family photographer; 8 ways to get artistic and beautiful family shotsMay 21, 2019
Mamas, why you need to be in the photos tooMay 21, 2019
Making Unpaid Work Pay Off: How to List Volunteer Work on Your ResumeMay 16, 2019
How to Craft a Dynamic Elevator Pitch With ExamplesMay 15, 2019